Ravenna: Christian art without the violence

Twenty-five years ago I first visited the city of Ravenna, in Italy (I’ve visited it once more since). It made a very positive impression on me. The major attractions of Ravenna, for me as for most people, are the beautiful Christian mosaics executed mostly during the sixth and seventh centuries, with some later additions. This was a period during which Ravenna was an important administrative and economic centre under the control of, first, the Ostrogoths and then, after that, the Byzantines.

As well as being beautiful and moving in their own right these mosaics provide a stark contrast with the Christian art of other periods. In particular they provide a stark contrast, in content as well as style, with the religious art of Latin Christendom in the late Middle Ages and Counter-Reformation. The religious art of these periods placed great emphasis – almost wallowed, I think one could say – in Christ’s suffering during his crucifixion, and in violent imagery generally (certainly scenes of hell are commonplace).

The Christian religious art of Antiquity and the early Middle Ages, on the other hand, almost always dealt with peaceful scenes, including scenes of an idyllic afterlife. There are very few scenes of violence. It wasn’t that the violence was denied – it was just that it was almost always placed ‘off-stage’ as it were. In particular the image of the cross was used reasonably sparingly and it was almost always portrayed, not as an instrument of execution, but as a victory standard and/or a sign of divinity. At first there seem to have been no images of Christ crucified on the cross at all; then when they did gradually became more common, they almost always showed a Christ not suffering but in control and triumphant. The art of Orthodox Christianity even today retains many of these characteristics – there is an emphasis on peace and beauty and God, whether in divine or human form, is always in control.

I recently found a good short paper dealing with Christian art in Antiquity and the early Middle Ages addressing the gentle nature of this art and just why there was an emphasis on the peaceful. Among other things, it examines why the early Christians were so reluctant to use art showing, or even symbolising, Christ crucified and why this reluctance only gradually ebbed. Some of the reasons are perhaps fairly obvious and some a little less so. Titled ‘Christian Symbolism: The Absent Cross’ and written in 2019 by Oxford academic and Anglican clergyman Fr Martin Henig, it can be found here.

The image of the Good Shepherd is biblical, of course (John 10: 1-21), but the early depictions that we find – of a man holding a sheep around his neck – is clearly based on the kriophoros; the ram-bearer associated with Hermes centuries before Christianity emerged. (Henig p.7.)

Here then is an early Christian depiction of the Good Shepherd which shows the sheep being held by the Good Shepherd around his neck, dating from the 3rd century (AD obviously). It is in the San Callisto catacombs. Around this time, if a Christian had been asked what visual image best symbolised their faith they might well have suggested the Good Shepherd.

And here’s a later mosaic of the Good Shepherd in Ravenna, from the Mausoleum of Galla Placidia and dating from the late 6th century. But now the Good Shepherd, while among his sheep, does not have a sheep around his neck. Instead he brandishes the cross. This is one of my favourite Ravenna mosaics. You can view a detail of the central figure by clicking here. You can also access an interesting short video on the Mausoleum by clicking here (the discussion on the Good Shepherd image starts at 6.37 in the video, which is 8.07 minutes long).

By this stage the cross had emerged as the premier visual symbol of Christianity. However, at the time the San Callisto image was produced it seems likely that relatively few Christians would have thought of the cross as the defining visual image of their faith (not least because the Roman authorities were still crucifying criminals as a punishment – whereas by the time the Galla Placidia mosaic was produced Christianity was the religion of the Emperor and crucifixion was outlawed).

My favourite Ravenna mosaic though – although it’s really a combination of mosaics – is a huge one, which appears as a harmonious unified composition but was actually completed in several stages  over several centuries. It in the apse of St Apollinare in Classe. Here’s a photo of the apse. It is centred on the transfiguration of Christ on Mount Tabor as described in the three Synoptic gospels (e.g. Matthew 17: 1-8). The overall effect is incredibly uplifting and restful at the same time. 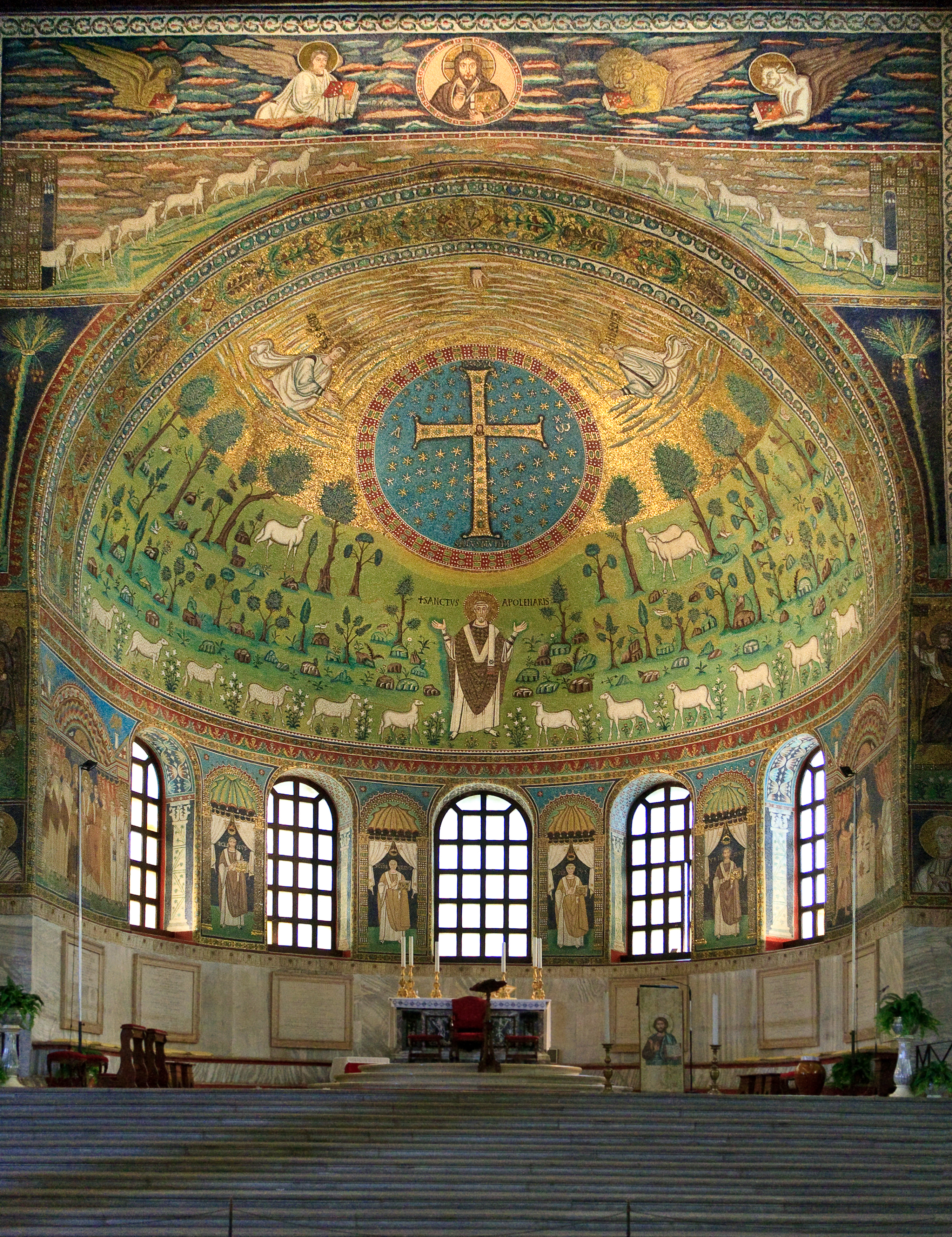 A medallion showing Christ as Logos giving a blessing and holding the scriptures is at the centre of the triumphal arch at the top. He is flanked by the symbols of the four evangelists, two on each side – John the Eagle, Matthew the winged man, Mark the winged lion and Luke the winged calf. Below them we can see twelve sheep processing upwards towards heaven, presumably representing the twelve tribes of Israel, six on each side issuing forth from Jerusalem and Bethlehem respectively.

Below them, the transfiguration occurs. At the centre we can see a jewelled cross on a blue field decorated with ninety-nine stars.  This symbolises Christ glorified. A small medallion showing Christ is at the centre of the cross. The letters alpha and omega are in the blue field at either end of the crossbeams. The cross and the blue field are flanked by the figures of Moses and Elijah, who the gospels tell us appeared with him at this time. Below we see three sheep looking up at him, representing the three apostles who the gospels tell us were present – Peter, James and John. A hand symbolising God the Father, who spoke from heaven during the transfiguration, reaches down from heaven above.

Below this again, we see a vast and verdant parkland, representing Eden, in which we see St Apollinare himself, the first bishop of Ravenna. He is flanked by twelve sheep, six on each side. These presumably represent his flock but it may also be that they represent the twelve apostles, showing the importance of the saint (for a time in the late sixth and seventh centuries the Bishopric of Ravenna rivalled that of Rome in importance). The parkland has animals (birds as well as sheep), varied vegetation, and also rocks meaning that the animal, vegetable and mineral kingdoms are all represented. Perhaps my favourite part of the whole mosaic is the portrayal of St Apollinare himself, and I’ve put a detail of that at the top of this post. Whenever he preached, his words, it is said, were as sweet as honey. To symbolise this, his cassock is dotted with little bees (these are the lighter green splotches against the royal purple of his chasuble).

I enjoyed a detailed description of, and meditation on, the mosaic apse of St Appollinare in Classe by Aidan Hart, a well-known icon painter and carver living in Britain (complete with photographs showing details). This can be accessed by clicking here. You can also access an interesting short video on this church, and mainly on this mosaic, by clicking here. It is 4.13 minutes long.

I have now seen almost all of the mosaics for which Ravenna is famous and I saw not one scene of actual violence in any of them though there were some references to violence (images of the cross being among these obviously).

The mosaics of Ravenna provide a truly beautiful window into a remarkable, and refreshing, period of Christian art. Personally I believe that scenes of violence in Christian art do have their place. It’s important to acknowledge the harder realities. And it’s worth making the point that the scenes in Christian art portraying Christ’s suffering do have the effect of emphasising the humanity of Christ, and with this the dignity of the human person.

As important as it is to allow ourselves to experience the emotional breadth of the Church’s year, I confess that I feel more at home in the grace and beauty, the overflowing optimism and joy seen in early Christian art, which invariably leads us to the New Jerusalem and the miracle of Easter. (Henig, p.11)

Christ as the Good Shepherd https://en.wikipedia.org/wiki/Good_Shepherd (from Wikipedia (downloaded 6 April 2020)